The results are in! ArtPrize 10 has officially come to an end. We are so proud to have had four of our amazing artists featured this year; Antonio Molinari, Gerd Schmidt, Konstantin Savchenko, & Andrii Afanasiev. We had an amazing time visiting downtown Grand Rapids and stopping into all of the venues! It truly is an experience. 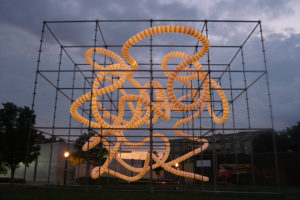 If you are unfamiliar – ArtPrize is an open, independently organized international art competition which takes place every other fall in Grand Rapids, Michigan. Over five hundred thousand dollars in prizes are awarded, including a $200,000 prize awarded entirely by public vote and another $200,000 prize awarded by a jury of art experts!

ArtPrize is free and open to the public and now attracts over 500,000 visitors, making it the most attended public art event in the world according the Art Newspaper’s annual “Big Ticket List.” 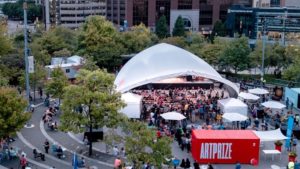 ArtPrize 10 announced the winners of $500,000 in prizes on October 8th, 2018. Below are some details regarding the winning entries!

Two $200,000 Grand Prizes were awarded, through smartphone-enabled public vote to “THE STRING PROJECT” by Chelsea Nix and Mariano Cortez, and by a jury of art experts to “brown, carmine, and blue.” by Le’Andra LeSeur.

LeSeur’s “brown, carmine, and blue” utilizes visual media, installation and performance to make sense of the way current ideologies frame marginalized identities. “Le’Andra so compellingly utilizes all of her resources to take us into her world and her worldview. Her work was so deeply immersive. It’s about gender, it’s about race, it’s about America at its core,” said Davis Anderson, an ArtPrize 10 juror and the Edna S. Tuttleman Director of the Museum at PAFA. 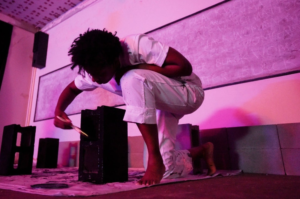 It is safe to say that the artists brought their all this year. There were so many deeply conceptual, emotionally rooted pieces that immerse the viewer in the reality of the artist and what they are attempting to convey. Most of which fell into the category of performance art. Most art critics will tell you that the conceptual element in itself is what makes an artist, an artist. Physical artistic talent alone is rarely acknowledged anymore and considered crafty, naive, or decorative on its own – only impressive to a non-art educated viewer or audience. I will say that despite this current viewpoint in the art world, there were several skillfully impressive works with honorable mention this year. We are in no way implying or intending to remove any thought or concept intended to be connected with these pieces. Simply wanted to throw a shout-out to some wonderfully talented artists this year – some of our favorite works detailed below:

Both falling in the 3-D category, public:

“The Phoenix” by Joe Butts & “Sun Pop” by Joshua Clark 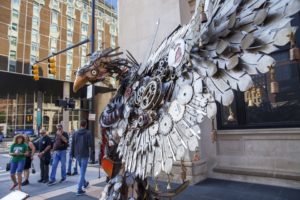 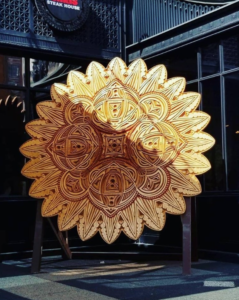 We want to extent congratulations to all of the winners and artists who exhibited at ArtPrize 10 this year! This event could not be possible for all of us to enjoy without you. We are excited to see what this event will continue to bring in the future. Art Leaders Gallery is so proud to call Michigan our home and our immediate art community!

Hours:
The gallery storefront is currently closed to the public.
We encourage all visitors to browse our online gallery as purchasing is still available through the website.