Shredding It: Continuing the Conversation 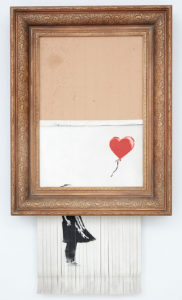 I am sure by now we have all heard of the latest Banksy prank pulled earlier this month. If not, here is a brief synopsis to catch you up with the art world this October! One of his trademark paintings appeared to self-destruct at Sotheby’s in London after selling for $1.4 million at auction!

The work, “Girl With Balloon,” a 2006 spray paint on canvas, was the last lot of Sotheby’s “Frieze Week” evening contemporary art sale. After competition between two telephone bidders, it was hammered down by the auctioneer Oliver Barker for 1 million pounds, more than three times the estimate and a new auction high for a work solely by the artist, according to Sotheby’s.

“Then we heard an alarm go off,” Morgan Long, the head of art investment at the London-based advisory firm Fine Art Group, who was sitting in the front row of the room, said in an interview on Saturday. “Everyone turned round, and the picture had slipped through its frame.”

The painting, mounted on a wall close to a row of Sotheby’s staff members, had been shredded, or at least partially shredded, by a remote-control mechanism on the back of the frame.

The mystery female millionaire winning bidder has recently announced that she will be keeping the piece at the original purchase price. She released a statement Thursday regarding her over-the-phone bidding experience and the later realization that she has purchased a valuable moment in art history.

“When the hammer came down last week and the work was shredded, I was at first shocked, but gradually I began to realize that I would end up with my own piece of art history,” the buyer, who was identified only as a “European collector and a longstanding client,”

I mean if we were her, we would keep it too! After all, isn’t artwork value – along with really everything else in our consumerism society determined by its popularity? The piece, recently retitled “Love Is in the Bin” is now considered to be more valuable than its hammer price just a week or so ago. In fact, all of Banksy’s work is rumored to have gone up in value the last week and a half. A smart play by Banksy, and a comment to all of us for caring about it – therefore continuing to increase its value.

Never the less, we art lovers are bound to talk about art! It is what we love. We galleries will continue to support our artists and their smart, potentially upsetting antics – monetarily motivated or otherwise! After all, if any of you are artists or know one in your personal lives, wouldn’t you agree that something would be lost without them? We thrive on and pull from their creative steam!

Many retailers, as well as political commentators have taken advantage of the press in the last week or so. I have below a few images for your enjoyment – 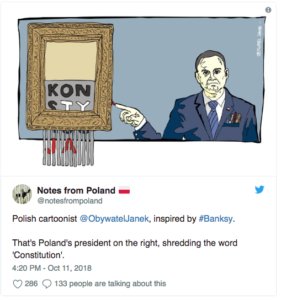 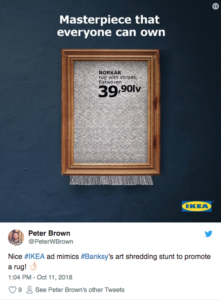 After all, there is so much conversation to be had about this act of performance art – if you will. How would you feel if you were the bidder behind the hammer? Initially – anger, regret, confusion? Eventually – happy, mocked, taken-advantage-of, famous?

Regardless of the potentially cynical societal undertones of Banksy’s ever so elusive commentary (made ever so evident in the 2010 film Exit Through the Gift Shop) we think it is a good thing we are talking about art again as a culture! We will soak up the attention and continue to appreciate artists conceptual efforts!